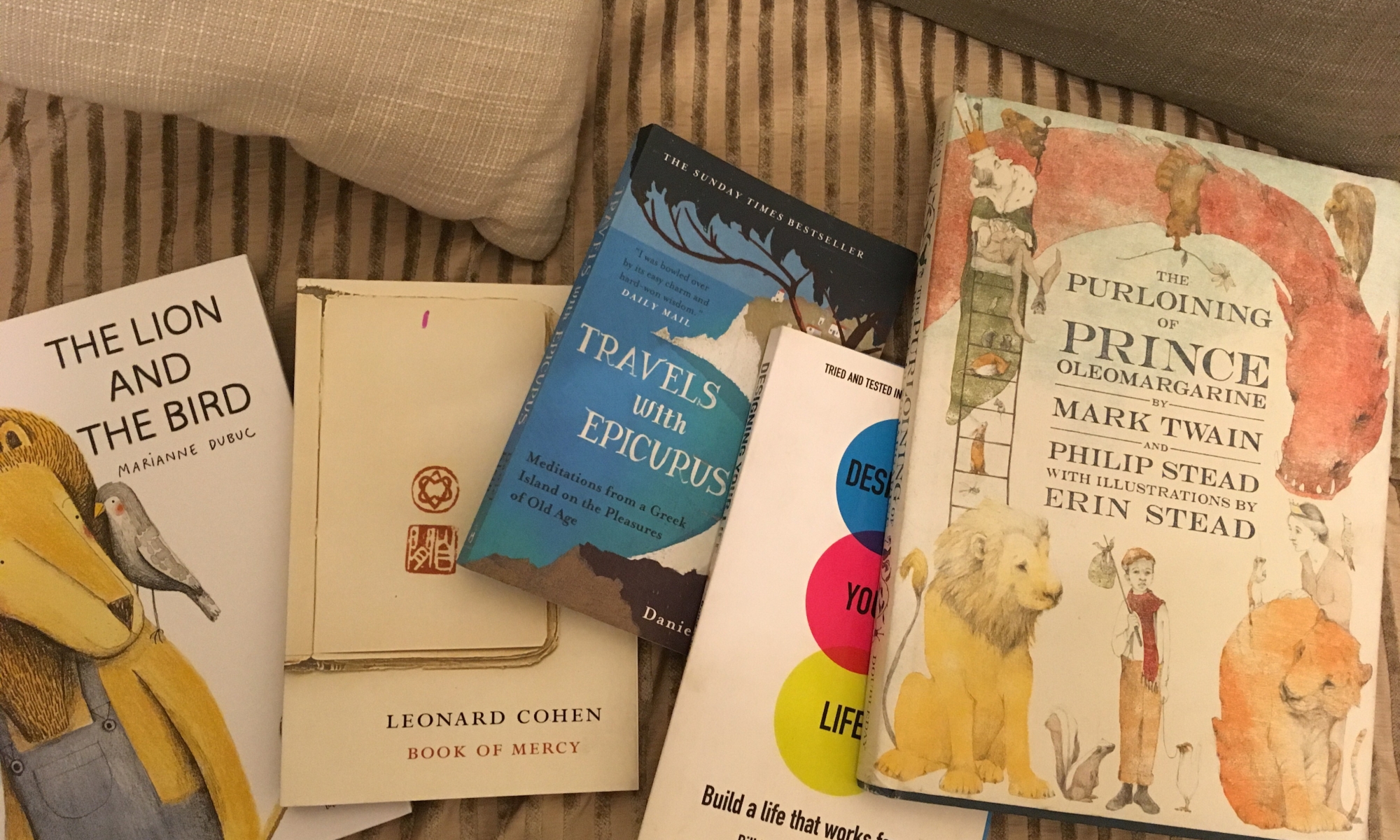 Whatever else goes on in life, I never lose faith that I will meet new books, new writers, new publishers and new bookish things.

I am highly programmed to serendipitously meeting new books. In the last five years, I got introduced The Guernsey Literary and Potato Peel Pie Society – officially the best Secret Santa gift I’ve ever received – thanks to my rather-sensitive-in-these-matters friend, Mehvash… and got guided from there on to 2 other epistolaries, a genre, I must confess is a guilty pleasure; I somehow came across Slightly Foxed and through them, not only got the Foxed Quarterly, but also a bunch of beautiful books; I’ve run into Pradeep Sebastian’s bibliomystery,  The Book hunters of Katpadi while trying to find an obscure Joseph Campbell title… I could go on!

As a lifelong  bookworm, I look back at the end of the year at how various books I’ve read have shaped my life that year.

This year was the year of conquering fears, so I decided to share it with the world… or the 5 people who will give this a read.

While this is not exhaustive, here are books that made a mark on me in 2018:

A Gastronomy of Marriage: A Memoir of Food and Love by Michelle Maisto. Referred by the amazing Vidya Mani of Funky Rainbow when I shared my love for essays and, obviously, Anne Fadiman. This is a cute little ray of sunshine of a book. If you like food and are a closet romantic like me, give it a read.

Past & Curious: Stanley Caravalho & Paul Fernandes: Rollicking old tales of Old Bangalore. Always a source of comfort. That time will not come back, but the knowledge that there were others who sought Walden in the middle of what has now become chaotic, the knowledge that we are neither naive nor alone – is comforting.

The Purloining of Prince Oleomargarine – This is a bedtime tale Mark Twain told his little daughters, over a 100 years ago, and on the basis of scraps of notes found more recently, was put together by Philip and Erin Stead. An African-American little protagonist and all the ingredients of all good old good versus evil tale. Two dragons, and two cats called Famine and Pestilence. Charming!

Travels with Epicurus: Daniel Klein: The Kominsky Method of books, this one talks about age and attendant… scenes, shall we say… with Greek grace. I loved this book so much, I am going to repeat what I did last year, and bring in my 42nd this year with it.

Enlightenment Now: Stephen Pinker: Reason, science and humanism, as the masterful man says in the title, to combat the ghost of facts in Whatsapp forwards, among other minor and major evils. He talks about how, despite our “The world is going to the dogs” panic, the world as a whole is better off – the poor are not as badly off as they were a few years back, and so on. And that, in this age, as in every other, there are some values that will save the day in the Age of Enlightenment, whereas others, such as fundamentalism and political correctness  won’t.

When: Daniel Pink: This one’s all about when in the day should you… anything; and also about early birds, late owls and the glamorous ‘other bird’. It’s definitely helped me structure my days of no client visits into “start at 7am, finish by 2 or 3pm, with a 1 hour lunch break and 2 walks in the middle”, with all work done within timelines agreed. Which gives me the rest of the day to dream and imagine.

Harari’s Sapiens and Homo Deus: The Jared Diamond of this generation writes about human history from the almost standalone perspective of what humans have done, and how we have evolved a a subspecies. The second one deals with humans version next – AI beings, Cyborgs or the elite healthy and those who cannot afford it. Like almost all writers of that style, while his writing is simple, the logic easy to follow and the shocks abundant, I’m bearish about signing on the dotted line as a believer.

Daniel Goleman: The Science of Meditation: His latest, and he talks about the various places and times he and his tribe have gone about learning to meditate. Anecdote follows anecdote, and he leaves you with no doubt about the value of meditation in our lives. An absolute must-read if you are considering or already do meditate. It’s like the runner’s equivalent of reading Today We Die a Little or What I Talk About When I Talk About Running.

Narrative Coaching: David B Drake: A book about how to be witness to and hold space in your client’s transformation. I believe that all my work with others, is about working better with ourselves, and if that is true, how do i root myself stronger in my own stories.

Bill Burnett & Dave Evans: Design your Life: From the time I heard about the D-School, I’ve always imagined what goes on within. This book by people who’ve built up the bricks and walls and halls of that institution helped me reset at a time I needed it most. I shared the main pieces with a bunch of good friends, and often catch up and share notes on where they are versus where they want to be. Based on the popular life design course, this one is quite fun to experience.

I’m not a big one for travel, being a homebody and of the belief that diving into a book beats having to spend inordinate hours in sterile airports. Nonetheless, this ended up being a year, when I travelled some 30,000 kms – a first for me. Which meant that I read at airports, read at hotel rooms, and read during these trips. While my fall backs when away from the comfort of home are the classics like an old Bernard Shaw or a Conan-Doyle or Poe or Wodehouse, here are interesting and topical books that made excellent travel companions.

Kipling-ing along, re-reading The Just-So Stories to prepare for fever tree sightings in the Limpopo province has to be up there in the “Never did I imagine” category.

Jock of the Bushveld and passing a road sign that referenced it, while entering Mpumalanga.

Trevor Noah’s Born a Crime gave as much context to the behaviour of people I observed in my two days in Johannesburg and Nelspruit as did anything else from the region that I’ve read. Plus, his has the benefit of being sincere and funny at the same time.

Moving on from books to the bookish…

It is often the people that draw us to places – and that was the case with the cute little neighbourhood children’s bookstore, Lightroom Bookstore and getting to know its lovely  and gentle biblioboss. After we did a joyous storytelling session by The Flying Disc School for kids who listened to us with big big, laughing eyes, I’ve taken to frequenting the place and bringing from there treasures such as JP Martin’s Uncle, Nevermoor, an Ernest Shackleton activity book, and what not.

This is the year of discovering the Blinkist app. If I want to learn about a book, or see if it will work for me at all, I head out there. It is easy to skim through the book’s premise to decide if I ought to. Which just means more time for reading fiction.

Also of massive help have been the various PsychologyToday, The Gottman Institute, and various other websites’ articles, that helped navigate the unchartered territory that was grief, brought about by this year.

A standout new use for old quote was when the good folks at Obvious State make beauty come alive. My Byron quoting bag which says “Pleasure in the pathless woods” carried its first cargo- wedding garlands handmade with love, for my brother and his wife-to-be.

In closing, it’s been a year of working with “The Pale Blue Dot” behind me, “The Just-So Stories” to my right and waking up to “The Wind in the Willows” and to a nice old line designed by some lovely folk at Atlantis Books. Not to mention, Alice & Harry Potter coasters, Bill Watterson drawings by Chateau de Chhabria, a Tolkien quoting welcome mat, and a whole lot of bookish love strewn about. I truly couldn’t ask for more… unless, someone wanted to get me some beauties from Slightly Foxed, or want to get me a subscription to the quarterly, I wouldn’t say no.

Here’s hoping your year in reading in the upcoming year is better than the year that’s passing.

Hat tip to D, whose routine of the annual book list prompted me to pull this one out of the back of the drawer, dress it up and parade it.