Welcome to season 3, of continued efforts to document the life and times of The Flying Disc School of India.

Earlier posts you’ll find relevant are: the first JustDisc League tournament in November 2018 and our presence at Auroville Hat in Feb 2019.

Last Saturday, I witnessed Sloppy Discs and Sloppier Discs (or Blue Sloppies and Yellow Sloppies) in action at the sectional tournaments. I’m sharing stories I experienced – and not the blow-by-blow account of matches and who placed where. Partly because I’m mostly clueless, thanks to a heatstroke-induced bunk of day 2, but more importantly, because I thought there were gentle and not-so–gentle shifts in the way the sport is being played. Ultimate Frisbee itself is a seismic shift in how folks engage with competitive sports. The changes I witnessed seemed slow and almost unnoticeable – the way tectonic plates shifting can be. Ergo, the need to tomtom all about it.

Episode 1: The old gods and the new

In the 4 months since I last saw the team in action, they’ve grown from a dozen kids and half a dozen adults, to about 100 people playing together at Bangalore Football Stadium twice a week. Since I haven’t been ad locum, I am commenting anecdotally:

The gang rents the stadium grounds twice a week for practice and pick-up games.

Tuesdays have evolved to be days when the tenured players practice together and some of the coaches teach newbies throws, rules of the game and so on.

On Fridays, everyone plays together. People from  other Bangalore teams, visiting sports folks etc. all join in. It’s taking on the colours of a cultural tour de force.

The spirit of the pick-up games are just that – anyone is welcome. It is a great way to induct new people gently and safely into the sport.

In July, Sloppy Disc debuted. We floated a boys team and a girls team, and the strategy was: “equal play time for all” No discrimination on the basis of talent, tenure, ability, athleticism etc. This was a tough call to make for a new team, but they made it, nonetheless. They screamed themselves hoarse from the sidelines to cheer their own and the opponents team. Both teams were repeatedly told what fun folks they were to play with, and both teams won “Most Spirited Team” trophies in the match. That was the one goal they went in with. Accomplished.

Episode 2 and half: Don’t stick ’em with the pointy end

When preparing for the sectionals, the teams made the decision to stay with the strategy of equal game time for all players (What the “real world” might call affirmative action, or literally, in this case, a level playing field). This was a conscious choice to “collectively pull forward” as opposed to “best foot forward”. Even in a crucial point, there would be no “optimal line-up” of the best talent or abilities. Whoever’s chance it was to go in, would go in and do their best. This meant, everyone would get equal chances to play in tough situations and learn about themselves and about the sport. The team would, in consequence, not place very high, but everyone would learn, everyone would move forward a little. And that, for the nonce, would be enough. In spirit circles after three matches, I heard other teams appreciate them for exactly this. So, it’s getting noticed. Next time, it might be in the consideration set for others.

This was a philosophy most people in the team bought in to. A couple of young guns keen on exploring their own athleticism and ability chose to join other teams, with much blessings. One of them, coached by 2 of the Sloppy Disc coaches in her college, also sought and got guidance as to which team might best suit her personality on and off the field. Such officer-like behaviour, I say.

Episode 3: The baby bears and the maidens fair

End of match spirit circles were a lesson in speaking truth. In one, one of our team guys appreciated the big fellas in the other team for being extra careful with the little ones (and some of ours were really little ones, at a whit over 3.5 feet), when barrelling about, full tilt. That, however, did not mean, going easy because a child was marking them, and staying competitive, if a bit charmed. Each of our two teams had 5 early teens/ tweens.

In the same breath, our guys also said, “Women in your team could’ve been given more play time. We notice it more, because when there are women in the field, we are marking women. And more often than not, we are marking men.” When feedback was backed up with data like this, it really made sense to the other team, as was evidenced by understanding and speculative nods. 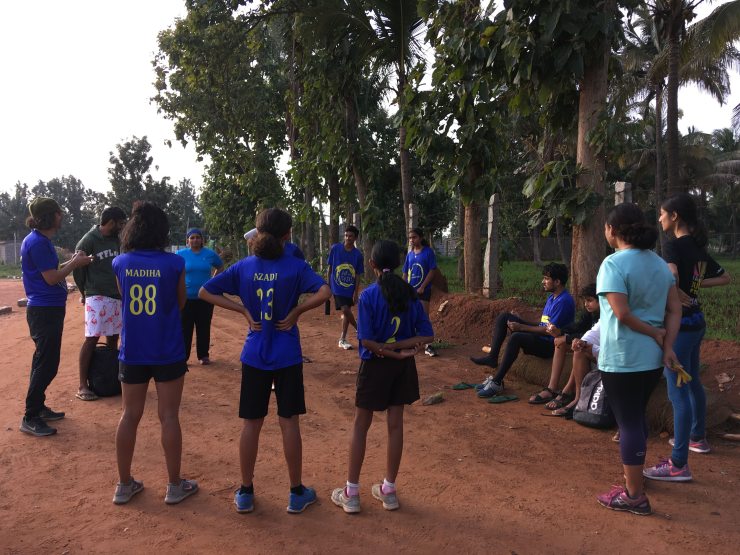 The language I heard was that of equality. (“Mark your person!”) And more, the language of change and learning. Once awhile, someone would holler, “Mark your man” and then SEE that 50% of the people doing the marking/ being marked are not men. And swiftly look sheepish and change to “mark your person”. So, changes to how we see and talk about things are preceded by visible changes playing out.

Very interesting was me intercepting the fag end of a conversation between a 14-year old and possibly a 19-year old, that went, “This is one of the few sports that is not male centric. Let’s keep it that way” “I know, right?”  Not wearing my generational hat and either saying, “ha ha so cute” or “what experience do these little ones have to talk like this”, I decided to respect and appreciate them… and was rewarded with looks of acceptance. I’d liked to have understand their reality further, but I’m sure there will be opportunities to do exactly that in the future.

Episode 5: The dance of dragons

One of the teams coached in frisbee by a TFDSI coach and in running by another TFDSI coach played against the Sloppies. The energy on the sidelines was INSANE. Our young ‘uns went over, learnt their chant, and chanted to encourage them. The other side came along and asked, “What is your chant, again?” It was a bit complex. So, they learnt the chorus first, and joined in when we cheered. Then they came back and learnt the whole thing, and chanted when they saw the Sloppies go low on energy. That’s right. The opposition cheered for us, and we cheered them on. There was genuine effort to motivate everyone on the ground. People sincerely said, “hard luck” when the other team tried and dropped the disc. Before long, people were trading life stories. That other team averaged 19-year olds. Misty eye cleared? Right. Read on.

Episode 6: Knights of the seven kingdoms

The last spirit circle for the day: “You could be more open-minded when calling a foul. Come maybe from a position of ‘I could be wrong, but let’s talk about this?’ and see if it makes a difference” preceded by, “This is just my opinion. You don’t have to accept it. You can listen and disagree” I LOVED that sense of strong opinions, loosely held. There was a sense of “We are sharing what we experienced.” Making that an invitation to reflect and not an absolute “This is my belief, and if you don’t like it, it’s over” made all the difference to how it was received by the other team.

It made the other team, a young and fresh one, sit up and take notice. Within minutes, they pointed to our injured captain, who had, during the match, offered his opinion on the rules from the sidelines with an “May I please tell you what I think?” and said, “You role modelled it for us. You were polite. You explained. You talked to us nicely, even when emotions were running high. We can now connect what your spirit captain is saying with what your team captain did. It makes sense. It made for a great game and great energy. We want to try that the next time.” So moved were they by this experience, and by our gang cheering for them, that they decided the whole team was “Most Spirited Player”. What a massive moment of validation that was.

People spoke of real situations why decisions get made the way they do:

“We all develop chemistry with folks who have the same level of ability. Breaking out of those horse blinders will take conscious and a hell of a lot of effort, but it’ll help the whole team grow”

“A lot of people come from far off to play with you, as they do with us. If they don’t feel welcomed for whatever level of ability they bring, they will slowly stop turning up, and the loss will be to the sport. Also, what are we sending people home with, who come to us? Are we asking ourselves, if we are inadvertently send them back feeling diminished, and not included?”

“We would like to hear the voices of the girls in the team” (followed by applause and a call out for the third girl who spoke, who didn’t further the point earlier made by a guy, but made her own point. Baby steps, see. Baby steps. Conscious baby steps)

The amount of heads nods for all these – felt like I’d stumbled into a rock concert!

There was also this moment of a mutual admiration society. Our team told the others: “Your girls did some fantastic cuts. End of day fatigue didn’t seem to affect their energy at all” They said, “The big pieces were all in place for you”. Then, the piéce de resistance: We said, “We have a lot of respect for this team. We’ve played as part of their team at other tournaments. We’ve learnt a lot from them and continue to learn from their guidance.” They said, “The way you guys are inclusive, and are organising weekly pick up games, and your approach to the Spirit of the Game, you guys are redefining the way the sport is being played in the country today”

On that note, the sun went down, and we went home. 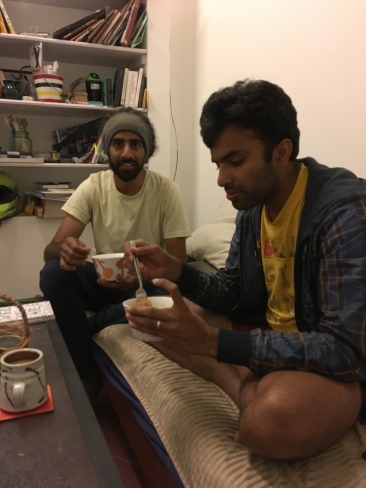 PS. I am super proud of Arvind Bharathi and Naveen “Zen Bloody” Chhabria, the original 2: you guys might have forgotten its a year of The Flying Disc School, but I haven’t. Expect a cake soon. Super proud also of Madiha for jumping in and doing what she does best – transform everything with love. Super proud of Kasi, the one I know the least about, but what decisive energy he brings!

I am grateful for all the new friends I’ve made this last year… for a reserved and shy sort, what an unusual haul it’s been!

Finally, the Cooke Town gang and Good Earth gangs – the brigade of players, parents who double up as food bringers, philosophy talkers and more – truly add to the overall nutritional and gustatory tone of things and add a patina of “All things bright and beautiful in Bangalore” to the proceedings.

2 Replies to “Sloppy & Sloppier Deserve a Cheer. Or Three.”